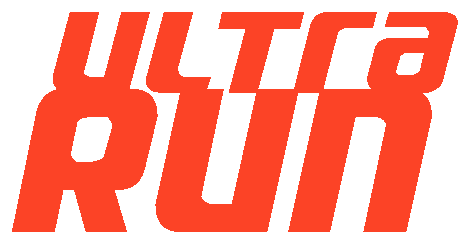 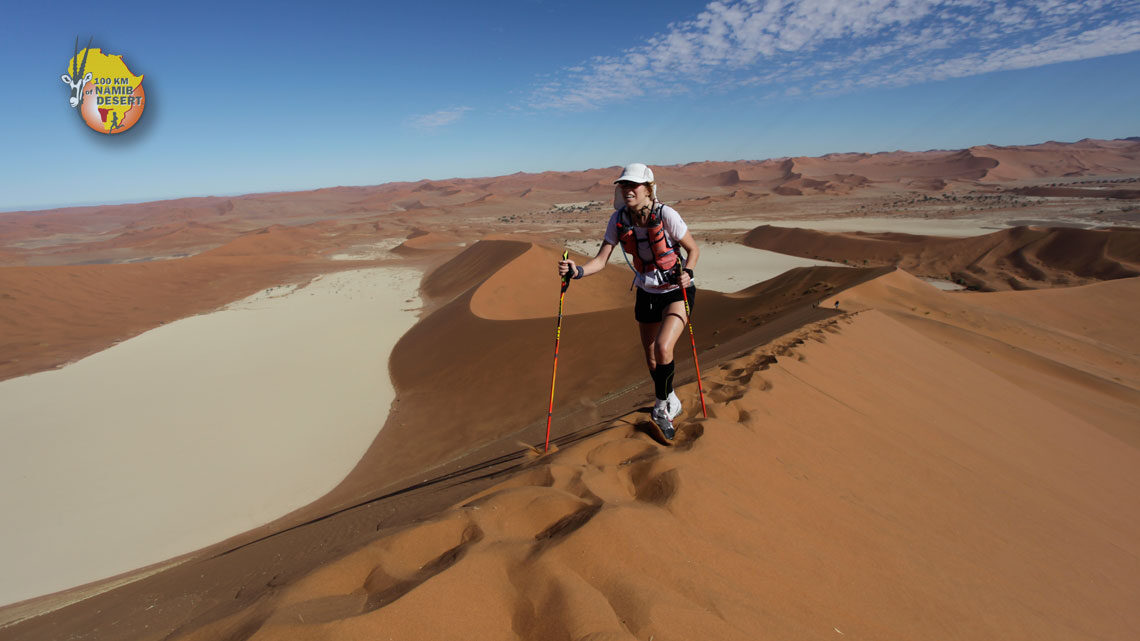 Ever felt like combining running in an epically scenic environment as well as enjoying a luxury lodge? The 100km of Namib Desert might be the right option for you!

After doing many wonderful running holidays usually involving self-sufficiency, carrying a sleeping bag and mat, the combination of running and pure indulgence was tempting.

I signed up for the 100km of Namib Desert which is a four-stage race covering 15km, 42km, 26km and 21km. The stages are varied; one savanna stage, a marathon mountain ridge stage, a canyon stage and a sand dune stage starting at Dune 45 and then climbing Big Daddy – the largest sand dune in the world. Each segment had a varying degree of soft sand so desert gaiters were highly recommended. The route changes slightly every year.

The race had aid stations roughly every 10km, and in between water points there were staff offering the possibility of extra fluids or words of encouragement. 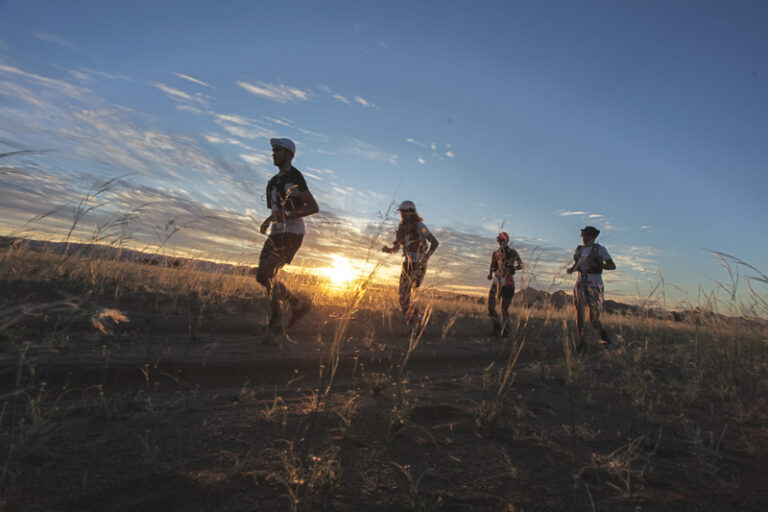 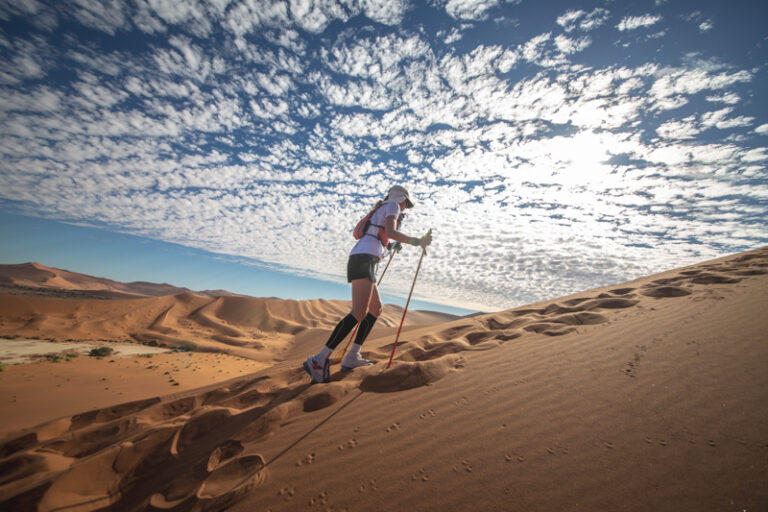 The trip wasn’t marketed as a safari but wildlife was ample while running. I passed springboks, oryxes, ostriches, monkeys and buffaloes – only cute animals no dangerous ones. Acacia trees and Welwitschia, both symbols of Namibia, enriched the scenery. The nature, combined with sunsets and sunrises, was magical. There was one evening run and three early morning runs. As the last marathon runner finished the temperature hit 48C – light, sun protective clothing was a must.

Participants stayed at the Sossusvlei lodge. The property is vast, spanning 40,000 hectares. The staff showcased the spirit of Africa, being friendly, helpful and always smiling. During the bush camp dinner and start of the first stage, we enjoyed local singing and dancing as we set off.

There were gourmet meals and for the exotic eater there were kudu, crocodile, zebra and springbok meats to try. The juicy Namibian melons were the sweetest I had ever tried. All meals were home cooked. The lodge pool was an oasis at midday. Even after meticulously applying SPF 50 sun protection lotion you returned with a deep tan. During the rest periods between stages you could take scenic flight tours to see seals on Namibia’s coast, spectacular canyons and majestic sand dunes or explore the nearby nature with the local wranglers. The race was small and international, welcoming all abilities from walkers to ambitious runners. There was something for everyone. 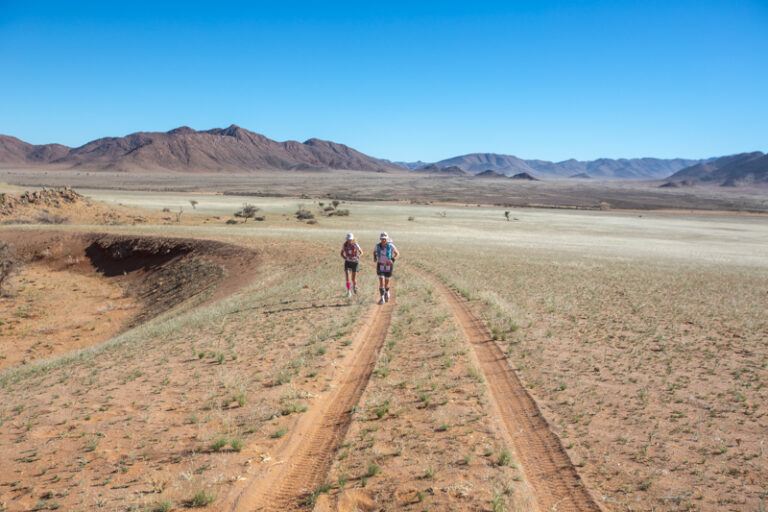 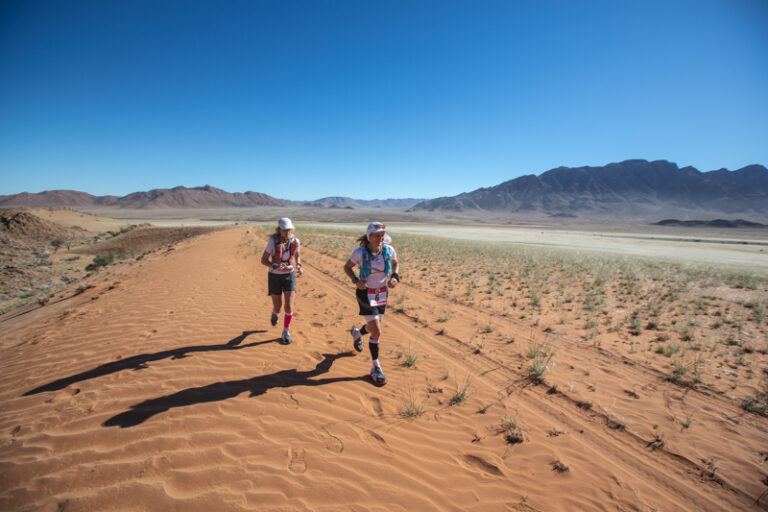 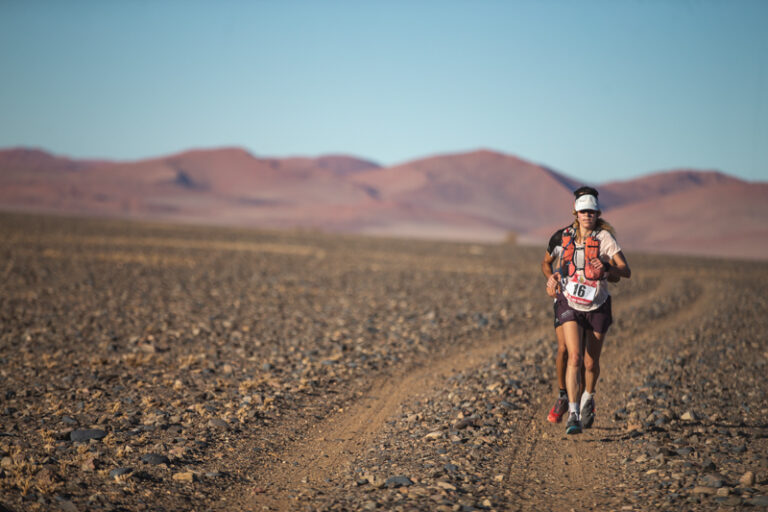 Namibia is three times the size of the UK with a population of 2.5 million. The country is peaceful and safe. The wilderness and immense landscape were spellbinding. Visiting Sossusvlei and Windhoek only took you to the middle part of the country. Namibia is far away. I flew to Windhoek from London via Doha. With participants arriving on different flights and some inevitable delays, the Zitoway organising team pulled strings to make the programme smooth.
The Zitoway team consists of Italians (Andrea, Adriano and Manuel), a Spaniard (Carlos) and a local (Nel) all passionate to give each runner an unforgettable experience. There were generous goodie bags for each runner with three t-shirts and Sahara caps. Finishing medals were awarded to all participants with special trophies to the top three men and women as well as numerous special prizes.

The final night was in Windhoek with a last celebration dinner and a short city tour.
The hospitality, warmth of the locals and fellow participants, colours and nature made the trip extraordinarily memorable.
I discovered that indulgence doesn’t come cheap. The price is less than the Marathon des Sables but pricier than the average running week. On the other hand, once in Namibia, it was all-inclusive except drinks. Useful advice was that the tap water is drinkable. Don’t forget the kidney belt for the lorry bus ride between Windhoek and Sossusvlei! It was a bumpy ride with incredible views.

In the end, therunning, indulgent, adventurous experience was worth every penny. The 100km of Namib Desert dazzled. If I had more time, I’d have added a week of sightseeing in Namibia exploring new trails. 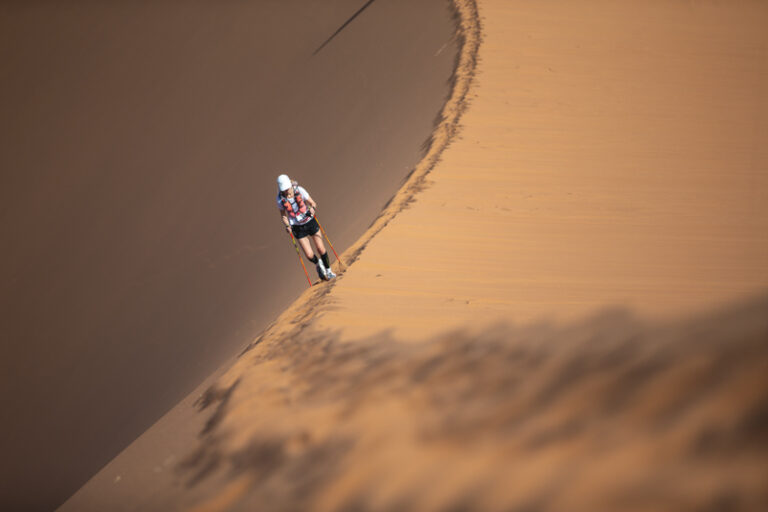 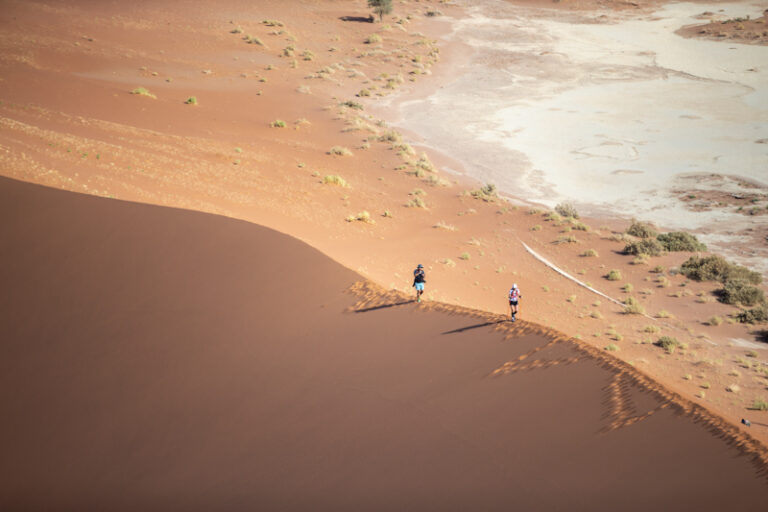 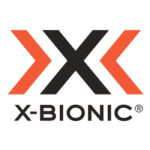 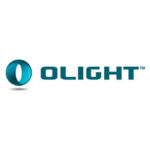 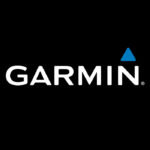 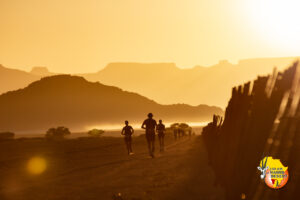 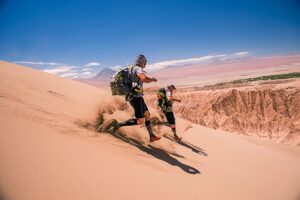